Got a lot of positive feedback from the previous “Cruisin'” column, so I figured I’d pursue that a bit further here. One of the things several of you mentioned–and lamented–were the many somewhat rod-related games that were an integral part of ’70s rod runs not only across our country, but around the world. Of course the most rod-related was the original StreetKhana, initiated with the first NSRA Nationals in Peoria in 1970. An offshoot of the sports car gymkhana, this was a very twisty short course laid out with cones and chalk in a parking lot. Naturally each car was timed with a stopwatch, but high speed was neglible because most courses included backing into spaces, or even parallel parking. In fact, I remember a few where the driver was blindfolded, verbally guided by a passenger. As several pointed out, they were participant-oriented, and bore little resemblance to the serious, semi-pro cone-racing of today.

Of course the original rod run game was volleyball. Don’t ask why. It was club vs. club. Did things like blindfolded wheelbarrow races come closer (wife in ‘barrow guiding blinded husband pushing)? A popular one for all family members was the sparkplug-changing contest. At least that was car-related.

So what in the world are those loonies, above, doing? It started out as creeper racing. You know, lie on your back on a regular shop creeper, push with your feet, and try to navigate a course…not easy, as you can imagine. Well Gary Meadors and his fun-loving crew–not to mention enthusiastic (i.e., competitive) participants–were always going one better. So of course plain creeper racing soon evolved into–what else!–motorized creeper races. And if hot rodders are going to race things with motors, you know where that goes, right? So that’s what those speed-crazed creeper racers are doing. A rare, weird photo from my files.

And this, my friends, is yours truly hanging onto the ankle of Dean Hargesheimer, as we compete in another Meadors-invented game called the StreetSweeper. Again, it was a

short, twisty, hay-baled circuit, and you had to maintain contact with the rubber ball, with a broom, the whole way. This was at Lodi in ’74, not long after I had found this “lost for 10 years” orange ’32 Chevy with a big race-built 394 Olds and 4-speed Hydro. I’m pretty sure we won this event and I came in 2nd in the Go-Whoa (run to your car, get in, start it, accelerate, then stop on a mark). That coupe was a runner. Too bad I set the engine on fire. But that’s another story.

Following up on “Grounds Cruisin’,” reader PPGJim noted that the ’32 Chevy roadster pickup in the lead photo was built, flamed, and driven out from San Diego by graphic artist John Pickle, but that he traded it that weekend to longtime MSRA member Jerry Johnson for his ’41 Ford sedan Delivery. Later Jerry drove it back out to (and all over) 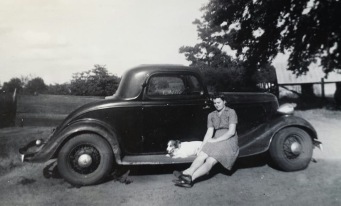 California to work with ex-Street Rodder Editor Tom Vogele on NSRAs StreetScene magazine. How many degrees of separation is that? And reader Noel Loft said his favorite photo was the orange ’33 coupe with the couple lounging on the running board. He didn’t identify the pretty lady and her dog doing the same in the photo he sent, but it looks like that 3-window is only a few years old, and we’d guess she’s a close relative.

I also chatted with Frantic Fred (in the red ’29 roadster pickup) yesterday, who said hands down St. Paul was (and is) the best cruising fairgrounds of all (MSRA still holds Back to the ’50s Weekend there). So I thumbed through my black-and-white print files

and came up with a few more unseen St. Paul pics, including these two of a pretty rare phenomenon: cruising trailers. I suppose you could carry some extra luggage in the trunk of that shrunk-down ’40 Chevy sedan bustle (above), but it’s really made just to

carry a couple extra passengers–compete with umbrella–around a fairgrounds. The workmanship is amazing. And the one at right, built by the Mill City Street Rods of Minneapolis, includes comfy seating for many, Tru-Spoke wire wheels, and probably the most important part, a good-size (and well-stocked) ice chest mounted out of the way, but within easy reach.

cruisng the “streets” of the county fairgrounds in Merced. This was one of Meadors’ early ’70s events, when he was working for the NSRA. Remember “Motate to Merced?” This car next got heavily involved in nostalgia drag racing at Fremont, with Suzie driving. But after a twitchy 4-bar rearend put it into the guardrail, backwards, Don rebuilt it as a progressively more serious racer.

Trivia? Maybe. Trivial? I hope not. But you never know what you might see, hear, or learn in this column. So stay tuned. There’s plenty more where this came from.