This is a photo that neither speaks 1000 words, nor needs anywhere near that many to explain it. One will do. And it’s more a yell or scream than a word. Get my drift?

I can’t tell you who these exhilarated, somewhat aged loonies are. At this point I can’t remember where this photo came from or how I got it (I think it just showed up on my Google page, as so many strange photos do). But this one I kept in my photo file for a long time, waiting for some reason to use it. The main thing I can tell you is that these guys are crazy.  And I sincerely hope they survived this wild ride to brag about it over beers later. You will note that they are wearing minimal protection of any kind.

About the wildest piston-powered thing on water is a Blown Fuel Hydro. They run well over 200 mph in a standing-start quarter mile, and if you’ve ever seen an “Agony of Defeat” clip on TV, you’ve undoubtedly seen how instantaneously one of these can take off, fly, flip, and disintegrate. This boat obviously has a hydro hull, is prop-driven, and is currently in the “fly” stage. We can’t tell if that’s a blower behind those gray bare heads, but the blued zoomie headers would indicate that it is, probably on some gas-fed big block, likely a Hemi. I’m a little surprised it seats two. But this isn’t a Blown Fuel racer, it’s a river-racing “pleasure boat.”

Okay, that’s more than one word. But it’s a lot less than a thousand. And it brings me to the topic of famed and flamboyant drag racer Eddie Hill. Why? You might think the white hair and beard is a clue, because you most likely know Eddie (and wife Ercie) for their long, bright yellow, contemporary-style dragster that was the first-ever to break into the

Eddie set a lot of records in his lengthy racing career (more on this in a sec), and I have tons of photos of near-identical, long, winged, rear-engine T/F rails from this era, yet surprisingly hardly any of his Pennzoil or Super Shops cars. No, I’m old, so the Eddie Hill dragster I remember passionately is the one from the early ’60s that had two big, blown and injected Pontiac engines side-by-side, four big whitewall slicks in the back, and little tiny midget wheels and tires up front. Variously known as the Texan or the Double Dragon, the whole thing was hardly 100-inches long, with Eddie sitting at the back, followed by a huge ring-slot parachute.

I’ve got plenty of photos of this car. It was of course most famous for reportedly tearing chunks of asphalt from starting lines. It’s also claimed he did the first burnouts before runs, but that obviously didn’t hook the car up. More significantly, in 1960–on gas, during the fuel ban–he lowered the NHRA E.T. record from 9.40 to 8.84. That’s an incredible drop, and also makes him First in the 8’s, as well as the 4’s. 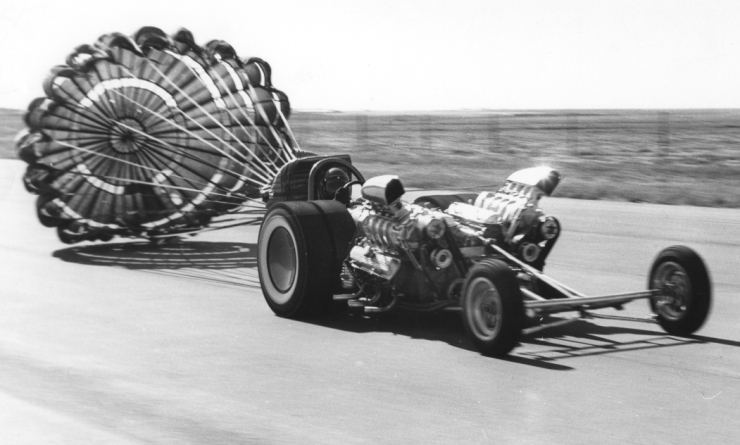 This twin-engine car evolved from a single-Pontiac version. Eddie was an engineer, and the car’s design is unique in using the engine(s) as part of the frame. Note how the two upper frame rails attach to the cylinder heads. He was also a promoter. I think that front plate added ballast as well as strengthened the front axle. But it also has his name and full address written on it, in case you want to book the car or buy speed parts. 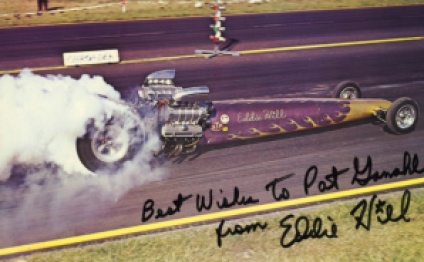 This last version of the Double Dragon was used mostly for exhibition runs and match races (on fuel). You don’t see many color photos of the earlier version, but it was mostly purple. Purple with gold flames?  Better yet. This was actually a post card that he sent me years ago. The back side not only has his name, address, and phone number, but states: Specialists in complete dragsters, chassis, and components. HAVE DRAGSTER–WILL TRAVEL.

But this is not why the opening photo reminds me of Eddie Hill. Nooo. After wrecking a more conventional single-Hemi-powered T/F slingshot that he promoted as “Texan 2, World’s Longest Dragster,” in 1966, he hung up his spurs, “retired,” and opened a Honda-Kawasaki dealership in hometown Wichita Falls, specializing in the latest thing–jet skis.

Instead of a Rolodex, I’ve always kept a business-card file on my desk, and every time I run through the H’s, I’m reminded by the one above of Eddie’s less-known–but quite illustrious–racing career…in Blown Fuel Hydros. Apparently he got hooked on water racing with jet skis, and things escalated–a whole lot.

By ’74 he was racing drag boats, and by ’76 it was Fuel Hydros. Soon he was shattering records. I’m not sure when, but he lowered the E.T. record on water to 5.16 seconds, which was quicker than the current NHRA record of 5.39! In 1982 he skated to a National Drag Boat Association (NDBA) Top Speed record of 229.00 mph, which stood for 10 years. In fact, he held the Top Speed records in the NDBA, SDBA, ADBA, and IHBA at the same time, and won four NDBA Nationals.

Then–here comes the punch line–in October of ’84 in Arizona his Hydro flew and flipped at 217 mph, resulting in broken bones, a concussion, and an eye injury for Eddie. While in recovery he decided, “Racing Hydros is crazy. I’m going back to dragsters–they’re safer.” Well….

You probably know the story from there. In less than three years he set the NHRA speed record at 285.98, making him the only person holding  quarter mile Top Speed records on land and water simultaneously. Then came the 4.99 E.T. By 1993 he was the oldest driver to win an NHRA T/F season championship. And by the time he really decided to retire in 1999, he had not only won 13 NHRA National events, but he held the title to 12 season championships, counting both water and asphalt.

There, that’s just a skosh over a thousand words, after all.