Somehow, someone, sometime relatively recently, anointed Gray Baskerville the Prince of Primer, the Patron Saint of Patina. I’m here to tell you that’s not true. Look at the photos of his venerable roadster on these pages. I took them in 1990. Sure, there’s some road grime under the fenders and on the chassis, and if you looked closely you’d see a tweaked splash apron, weathered chrome, and a few other scrapes and scratches. But the car is all bright red–and shiny–with nary a primer spot in sight.

If you asked Gray, he would tell you boisterously, just like any of his TRODA pals (Pete, Jake, P-Wood, Vinther, Tanaka…those guys), that hot rods are supposed to be red, yellow, orange, or black with flames (yellow/orange/red flames, of course). Straight glossy black was good in certain cases: 3-window coupes, ’32-’40 sedans, and anything built by

Bobby Alloway. As exemplified by Alloway, Gray would probably allow that the right bigs-and-littles wheel/tire combination in concert with a killer stance might override some other color choice–or even lack of color–but ultimately hat rads (again, Gray’s term) should be bright, shiny, loud and fast.

I knew Gray Baskerville quite well. We worked together for 13 years at Petersen Publishing Co., first on the staff at Hot Rod, later for Rod & Custom. We traveled to events across the country, stood on drag strip starting lines, drove out hot rods and tested others’…hell, I was even his editorial “boss” for a short time. He was my good friend.

But the first time I met Gray was way back in 1975, when I was a cub editor at Street Rodder magazine and I went to cover a car show at the then-new L.A. Convention Center. I forget if Gray was on the R&C or HRM staff at that moment, but I of course knew who he was, and his well-worn roadster, which at the time had one primered front fender, I think. We were both there to take pictures, before the show opened to the public, and I remember they let Gray park his roadster inside. When I saw it, my jaw dropped. The whole thing wore a fresh, glossy coat of new Mustang red, the wheels and grille were what we would currently call vanilla, and he had some chrome pieces redone such as the rear frame covers and nerfs. Inside, the ’50s black tuck-n-roll was redone in the same traditional pattern, but in more current dark brown. It was, well, reet. Righteous. I went over immediately to introduce myself and mention how cool his car looked. Totally nonplussed, he replied, “Yeah, it needed a shave and a haircut.” That was Gray.

I must admit right here that this isn’t a story about Baskerville. This column was engendered by the latest issue of Once-Was Hot Rod magazine. I had already put aside the prior issue to hang on my garage wall with an RIP tag and black crepe ribbon. The magazine’s current tag line is “Where It All Began.” I subscribed in 1960, and I have every issue back to ’48. I’ve seen it go through all sorts of ups and downs and ins and outs. But I’m afraid–without making a big stink or tirade out of it–I finally have to ask, is this “Where It All Ends”? 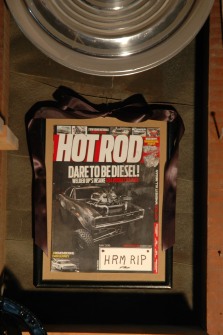 I’m not sure what to call what was in that issue. But I have seen convoys of these boiler-plated, all-terrain, blown-Diesel monster machines being trailered up to the desert to play Mad Max war games. Is this today’s version of extreme dune buggies? Well, they’re extreme. But are they hot rods? Well….

Let’s move on. The issue I’m talking about (Sept. ’18) is the Patina Edition. The editorials in both the front and back posit that high-dollar paint is out and primer and patina are in, as judged by their read of YouTube and other internet info sources. To illustrate and emphasize their point, inside there’s five pages of uncaptioned photos of mostly crappy cars and trucks, leading off with a weathered and dented ’55 Buick 4-door that is stone stock down to the wheelcovers. Gray would be mumbling, “Pete said, ‘A hot rod is a car modified for improved looks or performance,'” Before that, right after the ’55 Chevy that cost $500K in modifications to look stock, we find six pages devoted to a heavily weathered ’62 Chrysler 300, fully pro-modified on a similar budget–Viper V12, full custom frame/chassis, big billet wheels, custom leather interior–but with very carefully preserved patina (in lieu of “high-dollar” paint??) because that’s what’s really cool now. I’m sorry, but that seems either pretentious or stupid to me.

Since we’re talking about Gray, I’d point out in passing that the Hot Rod Archives page, under “20 Years Ago,” states: “Ro McGonegal just might be hot rodding’s best writer of the past half-century, and counting. ‘Ro Dawg’…also ranks among our best editors.” Um, at least they said “among.”

Back to the topic at hand. Don’t get me wrong. I’m not against patina and primer. In fact, in the first return issue of Rod & Custom (Dec. ’88), I put Jake’s brush-painted tub on the cover and ten full pages–including color–of other “Suede” featured rods and customs

inside. Robert Kittila’s black-primered, Hemi-powered Deuce, seen above with a young, happy, unlicensed driver at El Mirage, was one example. And yes, this roadster is still in black primer, because that’s the way it was built to be; by the owner in his garage with swap meet-collected parts, not in some pro shop on a multi-six-figure budget. On the other hand, yes, I’ll admit that if you really want to build a suede hot rod or custom on a six-figure budget, that’s OK, because in hot rodding you can personalize a vehicle however you want. The only rule is that it must be modified or customized. (Give Bill a call and make an appointment.) But in my personal opinion and experience, patina and primer are a prelude to nice paint, sooner or later.

To close this non-diatribe, I will just say that the current state of Hot Rod magazine saddens me. It hurts. I grew up memorizing my monthly HRM. When I realized my lot was to write in this field, that was the top; that’s where I ultimately wanted to work. And I did. I did what I could to keep it the best, and hopefully make it even better. I can’t do anything more now.