It’s not a great photo. But it is a great photo. Let me explain. That’s obviously Tommy Ivo blazing all four slicks in his four-engine dragster that famously debuted on the cover of Hot Rod magazine, Dec. ’61. This was one of many photos I got from bakery owner and drag racing collector Mark Andermahr and submitted when I did the story on the Half Moon Bay drag strip in The Rodder’s Journal No. 70. This photo was cut because, yes, it’s a bit blurry, out of focus, and even has a bit of dirt on it. But think about it for a second. First off, when a 4-wheel-drive dragster is spinning all four slicks, you can’t really steer it. And that car charged off the line a lot quicker than you might expect. See that guy in the white pants running in the background? Sue Brizio is sure that’s starter Andy getting the heck out of the way. Now, here’s the amazing part that took me a while to realize. Where is the photographer? This is not a telephoto shot. He’s standing in the middle of the track, about four feet away from those smoking tires and eight exhaust pipes. Yes. Yikes! No wonder the photo is a bit out of focus. It’s crazy.

Now, we know Bill’s No. 1 helper Donnie’s dad, Rich Welch, was the primary photog at Half Moon Bay. I called and asked if he remembered doing this. He said, “No way. I wouldn’t do that! That was probably Jim Kelly, who was young, and would run out onto the track to grab a photo like that before anyone could catch him.” Well, maybe they let him actually stand out there, as the next photo shows.

This photo was taken from the same place, probably the same day. That’s starter Andy flagging off Jim Davis (L) and Ivo’s former helper Don Prudhomme in the new G-B-P fueler on our right. Figure where the photographer’s feet are. If you blow this up and look just to Andy’s right, you’ll see the front wheel of Ivo’s car between spectators, waiting to push off. The top photo was probably the next one taken. I think that’s quite a story in itself. But wait. There’s more.

Besides my huge archive of photos, I have a pretty good collection of taped interviews with many rod and custom luminaries going back about 35 years. We’re talking near a hundred 90-minute cassettes with people ranging from Wally Parks and Don Garlits to George Barris and Ed Roth, with all sorts in between. Many were for articles or books, but others were just to get these people and their stories saved on tape.

I first talked to Tommy Ivo back in 1977, when I was at Street Rodder magazine and was just becoming intrigued with finding lost significant hot rods. His red, injected-Buick-powered T roadster was my all-time favorite, and though it hadn’t been seen in a decade, I actually located it, partially disassembled, in a garage in Riverside, CA. I went and took the photos you see here. 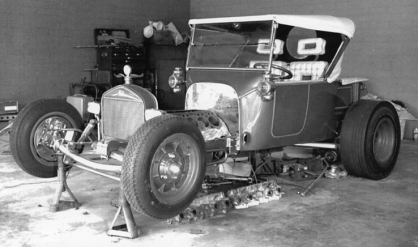 But then I had to find Ivo. He hadn’t been seen in years, either. But after many calls and contacts, I was given a number, and was told, “His mother will answer the phone. He lives at his mother’s house. And don’t call before noon.” So that’s what I did, and finally got Tom on the phone. In those days I was 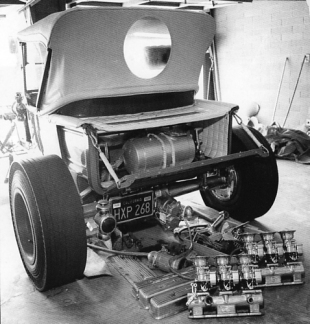 using notebooks instead of a tape recorder, and they’re long gone. But there wasn’t much story anyway, since Ivo was out of racing, and Hy Rosen, who had bought the car from Bill Rolland and had Barris “update” it (much like the Kookie Kar, but not quite as bad), let it sit like this for many more years.

So it was much later, when I was doing a story for TRJ on racing in the L.A. River, that I went over to Ivo’s house (the same one he bought for his mom, in nearby Burbank, when he was a 12-year old child actor), and turned on my tape recorder. The story I remembered in particular–the one that’s pertinent here–was how he and a young Prudhomme first fired and “tested” the 4-engine dragster on River Road (now known as Forest Lawn Drive), that ran unbroken for about a mile and a half on the south side of the L.A. River, next to Griffith Park. It was just across the river from Bob’s Big Boy in Toluca Lake, and it was where many an impromptu drag race was held during the ’50s and ’60s. Famously.

So I hadn’t played this tape in some time. And to say that Ivo is a story-teller–a raconteur–is an understatement. He doesn’t stop for 90 minutes, and it’s all good, amazing, and even hilarious. I’ve tried to pare this down to the essential story. But get comfortable.

Ivo started acting when he was a curly-red-head kid of seven. He was in lots of movies, large and small. So he bought the tract house in Burbank in the ’50s for $12,000 when he was 12. He said that’s where he built his T, in the garage, when he was 19. “Other than final welding, I did all the work myself on it and my dragsters..” He said he mostly drag raced the T, because it did so well. Then he decided to build a dragster with a similar injected Buick. Then came the 2-engine car, the first that Prudhomme painted, and they took on tour in the summer of 1960, while his “Margie” TV show was on summer hiatus. He said he hadn’t planned to become a drag racer, but the tracks not only asked him to come, they paid $500 a stop. But other twin-engine cars were appearing then, so Tom–always the showman–decided, “If they like two engines, they’ll love four engines.” He toured it from ’61-’64. Here are Tom’s words:

On River Road: “There’s about a half-mile straight where Forest Lawn is now, just a few miles from Bob’s, where we raced. In fact, that’s where we tested the 4-engine car. We took it over to River Road [just a few miles from his house] and tested it there. And Don threw the rods out of one of the motors. He was always hard on equipment! And that’s the only rods I ever lost.”

Q. That was on the street?

Ivo. That was on the street.

Q. And you had to push-start that thing?

Ivo. We had to push-start it. Pushed it, turned it around, and made a smoky pass down the road. And the only mistake we made on the car was we sprung the front end. We had to have springs on the front. Dragsters did, so why didn’t you have them on this, you know. What happened was, the tires would grab so hard, because of the weight of the car, that it was easier to flex the spring than to pull forward. So it “duck-walked” off the starting line. So where the shocks were, we just put solid mounts in there, and it worked perfectly. Then we just mounted the front end solidly. This was before we chromed anything. You know, we’d take it out and test it. I don’t think we even had a body on it yet. Just hanging out there in the breeze, you know?

But there’s a little secret to that 4-engine…. I mean breaking the rods in it. ‘Cause I was putting them all together here in the garage. I had all four motors on engine stands. So I was tightening everything. I torqued three of them. And my mother called me in to dinner. And when I came back out, I didn’t go back to the fourth one and torque it. And I never told…. Yeah, the rods were loose. And I never told Prudhomme this. I just ragged on him for blowing the motor!

Ivo.  I built the twin and took it back East in 1960. That was the first time anyone ever went on an extended tour. It was a whole summer tour. When I wasn’t doing a picture or TV show, I had nothing to do, so it was perfect for me. I could take the whole summer off. Prudhomme painted my cars, and he was just a good kid. You didn’t need any help, really, in those days. He was a Road King, too, and he just went along for the fun.

Ivo. He was my tire-wiper (laughs). He was 17 years old. I was six years older, but I looked six years younger. So when we rolled into some drag strip with a twin-engine car

on an open trailer in some far-of place, we looked like a couple of kids.

Q. Was this before the Gassers started doing their touring?

Ivo. It was before anybody toured. Nobody had ever done a professional tour before us.

You might have seen a couple of the photos. But I seriously doubt you’ve ever heard that story before.